“It would be particularly favourable now to promote the formation of a kind of a Pole of Peace in the above-mentioned Siberian region, where, precisely in rural conditions, a multinational community will continue to settle, building a space of friendliness, trust and unselfish mutual assistance, without imposing anything on each other and showing respect for the values that still remain dear for someone of the soulmates.
And also educating children in an atmosphere of peaceful interaction, teaching them all kinds of creative skills, which is already taking place in a rather interesting way …

… I feel it necessary to tell you that it would be to your benefit and the welfare of the entire country that many of you leave the cities and begin to actively master the conditions of the rural life.
But a significant difficulty in the realisation of such a vitally important to you aspiration will inevitably be the absence of a favourable number of like-minded people, ready to display friendly and unselfish mutual assistance in all aspects of life – of physical and, especially, psychological character.

But there is already a real basis and there is no need to start from scratch.”

“A true life-affirming Unity is possible not on the basis of anxiety in the face of some threat, but only on the basis of an ever increasing confidence in each other.
Such a Unity is destined to be necessarily formed, for it is the unique condition under which the normal and full-fledged development of the whole human civilisation can only begin.”

Read the full appeal at “vissarion.world“.

Some information about the community project

The community – located in the Kuragino and Karatus districts of Krasnoyarsk County in central Siberia – covers several villages along the Kasir River (Казыр), where the Eastern and Western Sayan Mountains meet.

The “Abode of the Dawn” (Обитель Рассвета) as a spiritual centre is located on the slopes of the “Dry Mountain” in the immediate vicinity of Lake Tiberkul,

In 1991, on 18 August, the Word of Vissarion – later called the pre-proclamation – was heard for the first time near the city of Minusinsk.
The first followers of Vissarion’s teachings appeared in Minusinsk in 1992.
Since summer 1993, a community started to develop: the first few dozen people from various places in the former Soviet Union began to settle in the villages of the Minusinsk and Kuragino regions.

In the second half of 1994, an initiative group of Vissarion devotees came up with the proposal to build an ecological settlement near Lake Tiberkul. In 1998, this settlement on the mountain was officially named “Abode of Dawn”.
Over the years, more and more people came from all over Russia and from near and far abroad. The size of the community is now about 4000 people. Most of the followers settled in villages near the Abode of Dawn: in Sharovsk, Gulyaevka, Cheremshanka, Petropavlovka and Tyukhtyata.

The community develops on the basis of new principles of lifestyle given by the teacher Vissarion. At the centre of the community’s life structure is the concept of the “Unified Family”. Essential contents of this concept are: to develop harmonious relationships among people, their ability to selflessly create everything necessary for each other with their own hands, the development of arts and crafts, the ability to live and work in rural environment, the education of the younger generation to become creative, responsible and peaceful people, and the lessening of the role of monetary relationships. 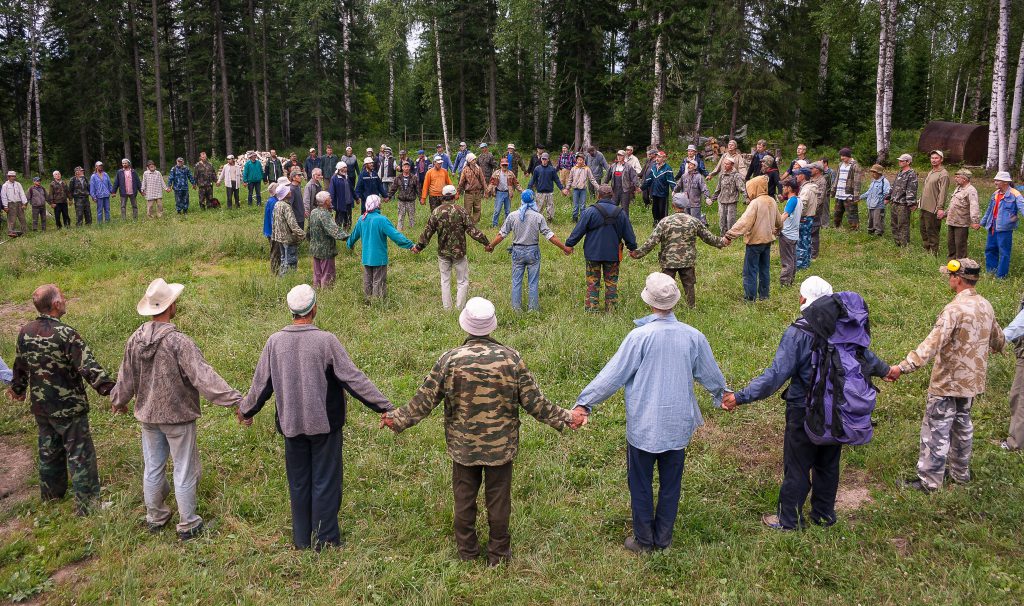 The birth rate in the community is three times the average in Russia, indicating confidence in the future. Most of Vissarion’s followers are vegetarians or vegans.
For the peaceful resolution of possible conflicts, there are well-rehearsed and proven procedures. Instead of blaming or even condemning each other, stands the principle of the aspiration to understand, of forbearance and of looking primarily at one’s own role in the conflict. Accordingly, it is recommended to see in every challenging situation an opportunity for one’s own spiritual growth.